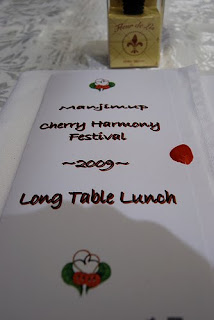 THE final event of the big Manjimup Cherry Harmony Festival is always the Long Table Lunch, set in the magnificent surrounds of a Newton Brothers cherry orchard.
2009 was no exception.
Well, in fact, it was, because every year new people arrive to experience the wonder of fine food, fine wine, fine conversation, in a fine setting. Depending on who they are and how they are, the day finds its own milieu.
2009 was exciting because those gathered were exuberant and expectant.
They saw John Rampaging Towie spit his teeth and a dummy to reclaim the Dummy Spitting Championship of the Warren District.
They watched a sudden gust of wind lift the tarpaulin, bust the steel stays and blow the patrons cover.
Then they witnessed men at work on cherry pickers, on ladders, with ropes, led by Paul Nothing Phases Me Buckley, Peter Who the Hell am I Fontannini, but both answered to the inspired direction of Stuart Mr Fix-it 21ST Century Ipsen.
In no time at all the cover was back, the patrons were amazed and the music played.
Then there was the auction, led by this man: 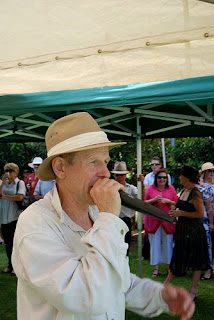 All photos on this page were taken by David Moyle, or Moyley, budding genius and photographer.

The two big items on the list were a hat signed by Danny Green and a T-shirt donated by the 3 Oceans Wine Company, featuring the Palandri International Comedy Festival and signatures from a number of Australia's best known comedians.
After a long and bitter struggle the hat was knocked down by Adam Take No Prisoners Buckley and the T-shirt was consumed by Bev This is Mine Norman.

The man below on the left is Adam Non-one Can Punch Me and Get Away With It Buckley and the man on the right is none other Harvey I've Got Knees Too Giblett. Together they are an essential part of the team that puts Newton Brothers Orchards on the road. 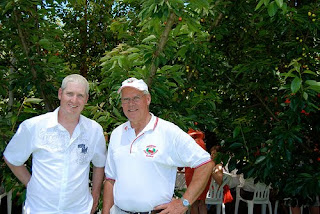 Is this photo there is a man on the left (no consequence) and a man on the right: Lance Larsen, good bloke and Big Bidder at the Manjmup Cherry Harmony Festival Long Table Lunch auctions. 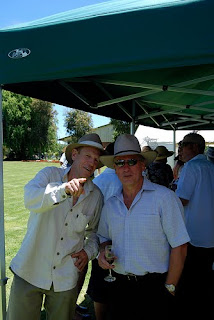 If you would like to be at this exclusive event next year, good luck. It books out early. And if you don't know someone in Manjimup, then you better get started, you're going to need all the help you can get.
ps: don't call this blogger. He's busy.
at January 04, 2010 1 comment: